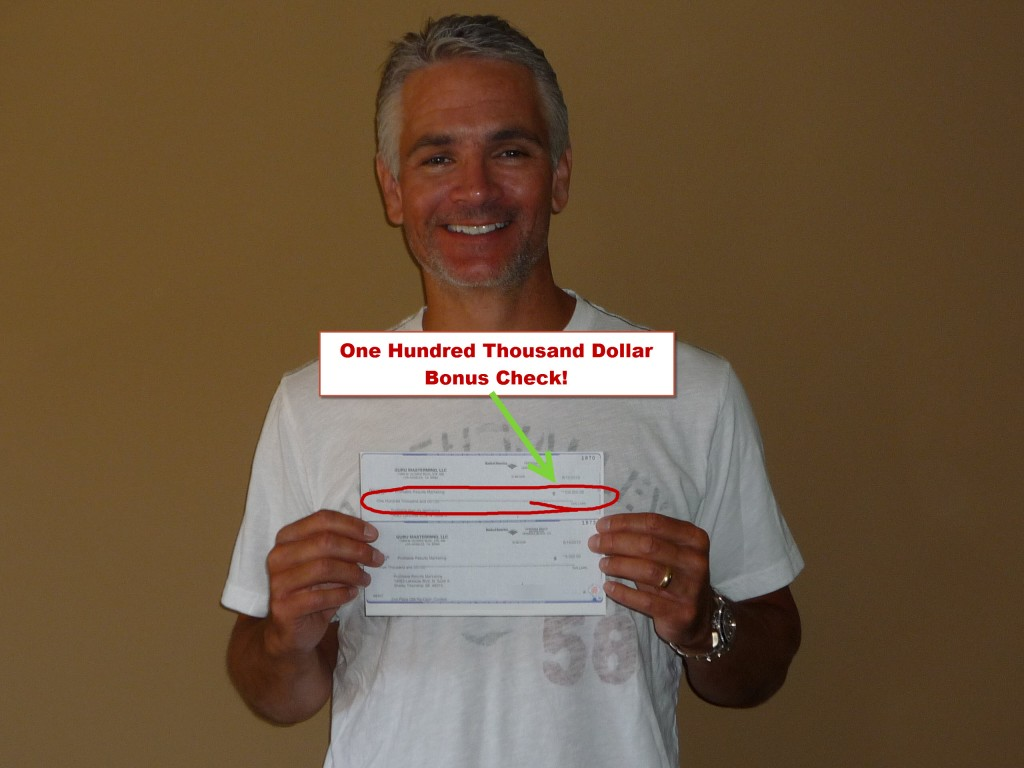 That simple little equation is…

Nothing happens online without traffic and leads.

You can’t generate leads without traffic.

You can’t  even sell affiliate products without traffic.

And you most definitely can’t sell your own products or services without traffic and leads.

Traffic And Leads are the answer to what every business owner and marketer needs more of… More Customers and More Money!

So I’ve spent the last 11 years developing a series of easy-to-follow systems and strategies that have allowed me generate highly-targeted traffic on demand… from multiple sources.. both free and paid… to build massive lists of red hot leads, and…

Then I Turned Those Massive Lists Of Red Hot Leads Into New Customers… and Huge Piles Of Cash For My Business.

This Is The Exact System That I Have Personally Used To Build My List, My Brand, And My Business To The Point Where I Walk Away For Months On End…

And Spend My Summers At Our Lake House… Watching My Children Grow Up… With Nothing To Do All Day… And All Day To Do It!

They have been responsible for the success for untold thousands of my clients and students who have put my simple systems to use in their own business.

It’s The Exact Same System that can help you Finally Do Whatever You Want To Do… And Spend All Day Doing It!

I’m Going To Reveal The Entire System For You In ThisLetter!

How Much More Money Could You Make If You

Had As Much Traffic… As Many Leads… And As Many Customers

As You Could Handle?

My guess is enough to build the business… and the lifestyle of your dreams.

That’s exactly what has happened for me.

But it didn’t just happen overnight…

And I certainly didn’t inherit my money.

When I was a kid things got so bad, for so long that we lived in government subsidized housing and we were living on food stamps just to put food on the table.

Don’t get me wrong, I had a lot of fun as a kid… maybe a little too much fun.

My Dad actually kicked me out of the house… and I was living on my own… while I was still just a kid in High School.

I didn’t even graduate with the rest of my class… I had to go back the next semester to take a few more classes in order to get my High School Diploma.

After wasting a couple of years doing nothing with my life I finally got around to going to a Community College because that’s all I could afford at the time… and I had to work my butt off working during the Summer to save up enough to go to College… 12 hour night shifts at the canning factory for minimum wage and trimming Christmas trees and picking apples during the day at the… I would go weeks on end with zero sleep… yet barely made enough to scrape by.

But I saved enough to put myself through Community College and pay the bills… but there wasn’t much money left after that.

A Head Of Lettuce And A Couple Bottles Of Beer

There were times when the only two things in my refrigerator were a head of lettuce and a couple bottles of beer… but hey, I was a college student so having beer in my fridge was like owning a Gold Mine!

The first few years were fine… until I had to transfer to a Major University to finish my degree.

I had to work up to 60 hours a week during the school week juggling multiple job as a waiter, bartender, warehouse worker, unloading freight trains, loading docks, you name it.. I did whatever it took to make ends meet and pay for school… I even had to work in an automobile supply factory that I swear to God was taken straight out of a movie about non-unionized labor in the 1800s… I was afraid for my life… it really was that scary!

Obviously going to classes and doing my homework wasn’t a priority, so… the University put me on “Academic Probation” for an entire year… which was there way of saying… “you’re kicked out of College because you never come to class and your grades suck.”

Finally, after 8 long years I was able to graduate… with a 4 year degree… and even then only by the skin of my teeth.

My dream was never “graduate from school and go work for someone else…” that just wasn’t my dream. The only reason I went to college in the first place was because that’s what I was told I had to do if I wanted to succeed… and I believed “them”, a least for a little while until I finally came to my senses.

My Dream Was To Start My Own Business

My own business would give me the money, power, and freedom to do what I want, whenever I wanted to do it.

Yet It Didn’t Start Out That Way

The early days of my business, just like my life, were much more humble than that.

It all started in April 2003 just around the time my baby girl was having her first birthday.

I was still working my “day job” as a Stockbroker…but as night I was working on making my dream of starting my own business a reality.

I was driving home in the SUV I just bought because my wife told me she thought she was pregnant again so we needed a bigger car.

It Was Late At Night, I Was Alone, And The

Rain Was Just Pouring Down…

I could barely see out of my windshield.

I had just left yet another Internet Marketing Seminar and I still had a 4 hour drive in front of me… alone in my car… in the rain… so I had plenty of time to think, and plenty to think about.

I remember thinking about why I still wasn’t making money with my business (the one I was trying to start part-time… at night and on the weekends… while I still worked a “day job” I hated).

I had already spent $15,000.00 on training programs and seminars, but I still hadn’t made a penny.

My Accountant Laughed At Me

My Accountant was convinced that  doing business online was a scam. Or at the very least it was impossible because “people on the internet want everything for free”.

I remember feeling like maybe starting my own business wasn’t such a good idea after all… and maybe I shouldn’t quit my day job.

The Problem Was I Just Couldn’t Generate Enough Traffic And Leads For My Business.

I was absolutely convinced that…

More Traffic And More Leads Were The

Solution To My Problem!

I had to learn absolutely everything I could possibly learn about generating more traffic and leads for my business.

So for the next 30 days.. after I got home from my “day job” as a Stockbroker…

I locked myself in my cold, dark basement and devoured every single piece of information I could get cold, frozen hands on about SEO, Traffic-Getting And Online Lead Generation!

30 days later… I crawled out of my cold, dark basement… exhausted. But all that hard work paid off because…

I Discovered That The One Critical Thing That Was Missing…was the concept of online leverage.

You need to learn how to harness the power of online leverage… that’s where the real money is.

I quickly went from losing money… to making three thousand dollars or more a day… day in, and day out… like clockwork.

I Was Able To Do It Working Part-Time At Night

Some of my biggest profits came from buying dirt-cheap Pay Per Click traffic from Google.

I called it “Adsense Arbitrage” because it was just like using arbitrage to make risk-free profits as a Stockbroker.

No one else was doing it at the time… at least not at the level I was doing it… and I was making a killing!

Yet I ran into a problem, and…

It Was All About To Come Crashing Down…

Right On Top Of My Head.

I was sitting at my computer having my morning coffee with my wife and wanted to see how much money we made the overnight while we were sleeping… but I was having trouble logging into my Google adsense account.

And then it happened…

I found a not so friendly email from Google telling me that they had just shut down my adsense account.

Apparently I wasn’t supposed to have two adsense accounts… it was a “violation” of their terms of service.

I did have two accounts, but it was completely innocent… I owned two legally formed, distinctly different corporations with different tax id numbers and different shareholders that were entitled to their share of profits and having two accounts was the only way to keep track of it all.

There was nothing sneaky about it… I just wanted to make sure the IRS got their fair of taxes, and my brother (the other shareholder for the smaller company) got his share of the profits.

But to make matters even worse… Google Said They Weren’t Going To Pay Me The Fifty Grand They Owed Me!

How would you feel if Google or anyone else owed you Fifty Grand… money that you earned fair and square… suddenly told you “Sorry, we just decided that were aren’t going to pay you that Fifty Grand we owe you…”!

I remember feeling like my heart stopped and my stomach instantly dropped to the floor, all tied up in knots… I couldn’t help but feel that…

Google Almost Put Me Out Of Business!

But rather than giving up and walking away I decided to stand up and fight that 800 pound bully that goes by the name of Google!

I swore right then and there that I would never, ever again get “fat and lazy” and allow anyone person or any one company to be my only source of traffic, leads or profits to the point that if they left me I’d have trouble paying my bills.

And chances are pretty good that you’ve been in a similar situation before because all business owners at some point have a tendency to believe that their best customers would never leave them… and Google was definitely one of my best “customers”.

They will leave you in a heartbeat if you make just one simple mistake like I did with Google.

The good news is that in the end Google finally agreed that I wasn’t trying to “pull a fast one” by having two adsense account and they finally agreed to send me the money they still owed me… close Fifty Thousand Dollars.

It Took Google An Entire Year To Send Me The Fifty Grand They Owed Me!

However, giving up was not an option for me. I had two small babies at home and a wife that were all depending on me.

Plus my dream of quitting my day job so I could run my own company and be my own boss.

So instead of giving up… I Fought Back!