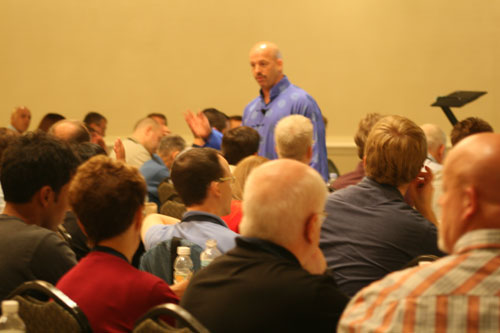 “CAN YOU MAKE A CHANGE IN YOUR LIFE LIKE THIS?”
FROM TO

Procrastinator – Someone who gets things done

In just a few moments I am going to “bare my soul” by telling you a series of intensely personal stories about my life. As I relate them to you, I will do far more than tell you about my success … I will introduce you to your own.

How would you like to end ALL self-sabotage once and for all? To blast through ANY and ALL obstacles? To overcome fear, guilt, worry, self-doubt as well as the pangs of previous mistakes and failures? To achieve anything and everything you earnestly desire from life – faster and easier than most people can possibly believe?

Sound too good to be true? It’s not.
But I will agree with you on one thing: Many of us have been sold a bill of goods about life having to be a struggle, filled with nothing but endless years of hard work, heartache, pain and agony. Yet, the truth of the matter is that the mega-successful people have always found a way to hit their targets and goals without all the drudgery so many people accept as “the way it is.”

My name is Matthew Furey and I’ve been studying “success” for most of my life. While in college I won a national collegiate wrestling title; years later I became a world kung fu champion (in fact I am the only American to ever win a world kung fu title in China, beating the Chinese at their own game). I am a best-selling author, a very successful entrepreneur and a top-notch speaker. I have been featured on the cover of several martial arts magazines and my articles in these magazines as well as my daily emails, draw customers from over 140 countries.

Now, I realize that you might be thinking: “That’s all well and good, but what’s that got to do with me?”

Good question. And the answer is my success has everything to do with YOU. Why? Because success leaves clues. No one succeeds by accident. And no one succeeds without standing on the shoulders of giants. I am no exception. You’ll see what I mean when you read about my struggles earlier in life.

Before I Learned The Secret of Success – Life Was Not So Rosy
In case you’re impressed with my credentials – bear in mind that before I learned “the secret” to real and lasting success, everything was a struggle. I had no money. I had no good friends. I had a dead-end job. One failed relationship after another. And what bugged me more than anything is that I had desires I wanted to fulfill – and I didn’t even have the drive to take action to make them a reality.

“Outer Scars”
I also know what it’s like to be scarred and disfigured from an event that “should not have happened to me.” Today I live with the reminder: a face that was heavily scarred more than 20 years ago – when an insane drunk violently struck me across the face with a glass beer pitcher and laughed as it shattered against my innocent skin. I was in a crowded college bar when this happened, and to this day I can still hear the horrifying screams of young girls who saw blood gushing from me like a fire hose.

A few hours later, while in emergency surgery at University Hospital in Iowa City, I remember summoning the courage to ask the doctors how I looked. They had already cleaned the glass fragments from my face, as well as my eye, and were beginning to stitch me up when I said, “Could you tell me how I look?”

“Well,” the doctor replied. “Right now your face looks like a jigsaw puzzle.” And that it did.

There Is Light At The End of the Tunnel
As a result of this incident, there was significant scarring as well as skin loss and nerve damage which made it almost impossible for me to completely close my right eye. In addition to that, I developed a facial tic or twitch that I was unable to control.

And so, believe me when I say that I know what it’s like to live with inner turmoil; to lack confidence in oneself.

I know what it’s like to look in the mirror and want to look the other way. I know what it’s like to think that I would never find love; that no woman would ever love me; that, with my looks, I would never fulfill my lifelong desires, which included becoming a champion athlete, as well as an author and “professional” speaker. Most people are scared to death of public speaking, right? Well, imagine having to give a speech with a face that twitches when you don’t want it to. Don’t you think that would make you a little bit self-conscious? Not to mention it being a major distraction for your audience?

But do you know what? There’s a way out. There’s a way up and over and through all the unpleasant circumstances you may find yourself in during your journey here on earth. It may be easier to focus on this other place if we simply call it “the light at the end of the tunnel.”

Now, there are many things I can tell you about myself that I believe you can relate to. But before I go into more detail – I want to say that I sincerely hope you are moved and inspired by my words. I tell my story, not to brag or boast – but to show you the ever-expanding range of possibilities available to you if you simply take the time to learn how to focus on what you want and once you have the idea in mind, to go get it – no matter what your personal list of reasons or excuses may be.

How I Got My First Job
In February of 1987, right out of college, I applied for several jobs. Although I was a national collegiate wrestling champion and expert in the realm of fitness, I couldn’t get a gym to hire me if I paid them to do so. Prospects were grim. In fact, they were so bleak that I simply gave up and started a business. I started from scratch, doing so with zero experience.

Incredibly, for a reason unbeknownst to me at the time, the clients and money came to me with ease. Every day was one of excitement. New people called, then dropped by my gym (which was in the second story of a warehouse, right above a mechanic’s shop). I didn’t even know what to say to “sell them” – but, I suppose, because I was sincere (especially with my facial twitch), they trusted me with a credit card to reserve their slot. In spite of all my shortcomings and lack of people skills, that first year felt like magic. But then reality changed. A year later things were no longer smooth sailing. I couldn’t put my finger on why the same business that I now had “experience” it was getting harder and harder. And with each passing year, despite my study of every self-help book, course and seminar I could find – I just wasn’t able to advance in the direction of my goals.

“Why is everything so hard compared to when I started?” I often wondered aloud. I When I began everything flowed to me effortlessly. I was in “the Zone.”

What did I need to do to get myself back in that “Zone?”

Re-Entering the Zone
Six years after I started my own business, which up til then was really what you would call a “buy-job” – I re-entered the zone. The year was 1993.

After failing in yet another relationship, I made a decision to consciously choose the type of woman I wanted to have in my life. Due to my love of Chinese martial arts, I figured that I would be most compatible with a special someone from that culture. Well, one thing led to another and before I knew it, instead of finding a Chinese lady in the Bay Area of California, where I lived at the time, I ended up corresponding with a woman who lived in Mainland China.

It’s a long story, actually – but let me give you the short version: Strange and odd as this may sound, after being introduced through the mail, I fell “head over heels” for a woman who cast a spell over me with her eyes.

After reading a few of her letters, which at the time had to be translated from Chinese, I made a decision that would prove very unpopular with my family. I would fly to China to meet my “love” – and I would marry her.

When I made this decision it was a preposterous notion. First of all, in a rational world, you cannot fall in love by only reading a letter from someone you have never met. Second, in a rational world, being I didn’t speak a word of Chinese and my wife didn’t know a word of English, we wouldn’t be able to communicate. Third and in many ways most important, I was up to my ears in debt with absolutely no money to even afford a plane ticket to China, much less Chinese lessons, a wedding, honeymoon and the like.

And yet, in spite of all the strikes I had against me, including the twitch that she would find out about eventually, I felt compelled to make this decision – and, right or wrong, there was no one who could tell me otherwise.

And do you know what? After making this decision my life changed so fast you would think that God was standing over me with a magic wand, sending me everything I needed to make my goal a reality.

It was as if I was standing on the beach and wave after wave kept coming my way. All the clients and money I needed beat a path to my doorstep. Within a few short weeks I had a waiting list of clients. With a full slate of clients I had money I could use to get lessons in speaking the Chinese language. Six months later I paid off all my debts. And eight months after I made the decision I had plenty of cash in savings – and this was after buying a round trip airfare, putting money aside for the wedding and honeymoon – and, get this, after paying another person to train my clients while I was gone.

Nine months after deciding to get married I was on a Singapore airlines jet heading for China.